Ita is the patroness of Munster, often called ‘foster-mother of the saints of Ireland’

Ita was born in County Waterford of noble and Christian parents. Early on she set her mind on serving Christ in religious life. She founded a monastery in Killeedy, County Limerick, which attracted a variety of young people. She was given the title ‘foster-mother of the saints of Ireland’. She died in 570.

Ita, also known as Deirdre and Mida (Mo-Ída) is the patroness of Munster. Next to Brigid, she is the foremost woman saint in Ireland. Although of the royal family of the Déise, Ita is associated with with the parish of Killeedy (Cill Íde = Ita’s church) in south-west Co Limerick. Patrick Duffy tells what is known about her.

Originally from the Déise
Ita (originally called Deirdre) belonged to the royal family of the Déise (present-day Co Waterford). Her father was not a Christian and made an arranged marriage for her with a young nobleman. But from an early age she  wanted to consecrate herself to God and serve him in another location. In her youth, Ita dreams that an angel gives her three precious stones. So struck is she by the significance this, she awakens to puzzle over the symbolism. Thankfully, inspiration is at hand in the form of another celestial visitor who explains in a vision, that throughout her earthly life, Ita will experience dreams and visitations. The stones in the dream signify the gifts of the Father, Son and Holy Spirit to whom she dedicated her life. 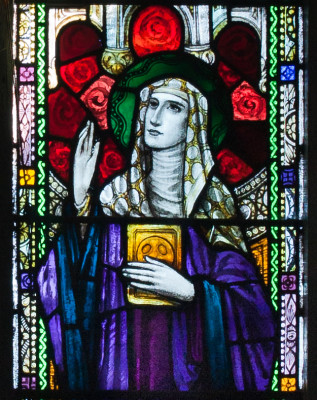 Ita seems to have been a natural organizer: she travelled about the district, taking part in the affairs of her clan. She bred horses. Her community became skilled in herbal medicine, and visited the sick.  Killeedy became known as Cluain Chredal, the holy meadow, and they made another foundation at nearby Kilmeedy (from Cill Mo Íde: Mo Íde – = “my Ita” – is a more intimate form of her name).

A school for boys
As well as educating those who joined her community as nuns, Ita also set up a school for boys. She taught them: “faith in God with purity of heart; simplicity of life with religion; generosity with love”

Some of these later became famous, among them St Brendan – whether Brendan the Navigator or Brendan of Birr is not clear. In a poem of Alcuin Ita is called “the foster mother of the saints of Ireland”.

Death and influence
Ita died around the year 570. Many church dedications and place-names recall her, even in her place of origin. Oengus calls her ‘the white sun of the women of Munster’.

Locally, her feast on 15th January is regarded as the last day of Christmas and is traditionally a day of family reunion. Girl children in the area round her foundations are still proud to bear her name.