Tommy was nineteen, and having completed his apprenticeship as a Panel Beater, started his own little business and was doing really well. His rally driving was also progressing and although still only a novice, he was already being tipped as a future champion.

On the October bank holiday he was returning from a dance in Loftus Hall, a few miles from home, in terrible weather and horrible driving conditions, when he had some kind of an optical illusion that caused him to see a whitewashed wall at a bend as a continuation of the road. Slamming into the three-foot-thick wall, he broke his two hips and in the early hours of the morning was taken by ambulance to Wexford hospital.

We got a phone call at 5 am, and having rushed the twenty-five miles to his bedside, we found him still in shock but in good spirits. When we again visited him late that evening we were told that he was being removed the next day to Kilkenny hospital for routine pinning of his broken hips. We were all, including Tommy himself, relieved that he wasn’t more seriously injured, and that in time all would be well and he would make a full recovery.

The next morning, again at 5 am, the phone rang. A call from the hospital saying that Tommy had a bad night and requesting us to come in. We arrived and were told that he was now sleeping after hours of torturous manipulation, in an effort to clear his lungs. He had developed ‘Embolism,’ a thickening of the blood due to severe trauma.

Having spoken briefly to the ward sister, we sensed that Tommy’s condition was critical and instead of waiting around the hospital, we decided to go down the town and attend morning mass at the Franciscan church. We prayed as we never prayed before and placed Tommy’s life in the care of all the angels and saints we ever knew, including Granny and Saint Martin.

As we walked back through the big entrance hall of the hospital we were met by the Matron who ushered us into a side room We were immediately petrified as to what it might mean, but we were still hopeful that our prayers would be answered. We froze in shock at the nun’s devastating pronouncement.

“I’m sorry to tell you that we have lost Tommy.” 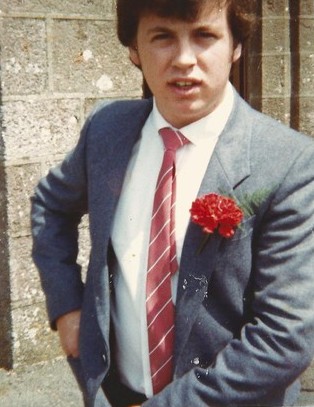 The next few days for all of us was like going through the motions of a horror hypnotic spell. The massive funeral, the anguish and mourning of his young friends – they took his crashed car and buried it deep underground in a nearby dump, never to be seen again – the deluge of sympathy and goodwill, and the love and support of the whole community. As I was following the coffin out of Ramsgrange church, some woman that I have never identified, tapped me on the shoulder and said:

“Paddy … God always made the back to bear the burden.”

But my burden was over-loaded with the anger I felt, and still feel, that Tommy could and should have been saved. The likely onset of ‘Embolism’ should have been foreseen at the hospital and measures taken to prevent it. It wasn’t, and ever since, Tommy and Granny are sleeping side by side in the peace and silence of Horeswood cemetery. Just nineteen, a bright and lovable young star, a gifted tradesman just starting his career. We were shocked, devastated and angry. It took a long time to pick up the pieces. You never really recover.