Drive along Knockalla mountain, locally called the Devil’s Backbone, where stunning views unfurl north of Rathmullan over Ballymastocker Bay (above) and across Lough Swilly. The road spirals like a giant letter ‘S’ and leads from Portsalon to Fanad Head with its historic lighthouse now open for self-catering accommodation.

Swing round the west side of the peninsula to the Blaney bridge spanning Mulroy Bay and, on a clear day, a vast panorama of mountain, island, lake, rock, moor, and bog opens ahead of you. 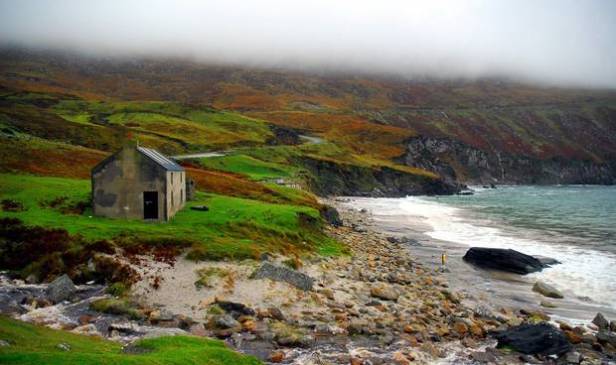 Keem Bay, Achill Island: Five blue-flag beaches would be an impressive tally anywhere, let alone on a single island. But that’s Achill for you. Keem Bay is a Signature Discovery Point on the Wild Atlantic Way, and for good reason… its breathtaking beauty inspired visiting artists like Paul Henry, Graham Greene and Nobel laureate Heinrich Böll, and continues to wow visitors today.

A self-contained world, Achill is a smorgasbord of mountains, lakes, cliffs, and long, empty beaches (five of them Blue Flag). Catch the right day and the road from Keel through Pollagh and Dooagh to Keem Bay is one that will live long in your memory. The squiggly coastline with its sheer drops to the sea falls down to a car park where the sparkling waters resemble a beach scene stolen from the Aegean, while looming round the corner at Achill Head are the spectacular cliffs of Croaghaun.

Distance: 48km from Achill Sound to Keem, taking the southern ‘Atlantic Drive’ loop through Derreen & Dooega. Allow at least a half-day with stops.

The skyline of the Coolera peninsula, 8km west of Sligo town, is dominated by the shapely hill of Knocknarea with Maeve’s cairn on top standing 372 metres above sea level. All roads lead to Strandhill at the mouth of Sligo Bay which has become a seriously chichi seaside resort. Shells Cafe is as close as you can get to eating on the water without wetting your feet. Complete the 25km loop by driving back to the N4 along Ballysadare Bay on the southern side of the peninsula.

Stretching along north Mayo from Ballycastle to Erris, the sea is an all-consuming presence along the Céide coast. From the glass-topped pyramidal tower inside the Céide Fields Centre you can enjoy a panorama taking in the Stags of Broadhaven and learn about the Stone Age landscape. The treeless and houseless road from Belderg to Porturlin in Erris is so narrow that coaches are not permitted on it so you will have this place to yourself – a remote section of bog and coast that quietens the soul.

The 20km Sky Road is a narrow finger of land looping around the three bays of Clifden, Kingstown and Streamstown. Bring your binoculars to identify islands and headlands such as Errislannan, or Flannan’s pensinula. Out to sea lie the small islands of Inishturk, Turbot and High Island. To the north, Omey Island is tidal, and it is a memorable experience to walk or drive across the wide causeway from Claddaghduff – just ensure you check the tide times so you don’t get stranded.

West of Dingle, the coastal road packs a natural medley of mountains, headlands and coves. But look out for man’s imprint on the landscape with prehistoric beehive huts, monastic ruins and clocháns. This delectable route twists through Ventry, around Slea Head and on to Dunquin; stop off at the Blasket Islands Centre to learn the history of island life. Beyond Ferriter’s Cove and Sybil Head a prominent landmark triptych of rocky tops, The Three Sisters, overlooks the ocean where fields slope to serene Smerwick Harbour.

From Malin Head on the Inishowen peninsula, and the farthest-flung northerly point of Banba’s Crown – named after a mythical queen – a single-track road wraps itself around the headland passing thatched cottages and pebbledash bungalows. Take the road past the Five Finger Strand and embrace the wildness and majestic scale of the ocean, ending up at Malin town on Twawbreagh Bay. Inishowen is often neglected, but the best advice is to get there soon before it’s invaded by Star Wars fans.

The Burren. This photo, taken from the International Space Station in February 2008, is provided by the ISS Crew Earth Observations experiment. The image was taken by the Expedition 16 crew, and is provided by the Image Science & Analysis Laboratory, Johnson Space Center. Photo: NASA

Starting from Ballyvaughan in the heart of the Burren, the road follows Cappanawalla and Gleninagh mountains to Black Head where cars pull over at Murroughtoohy. This is the best place to drink in the intoxicating combination of limestone pavement, ancient walls and glacial erratics, along with the huge expanse of sea and dramatic western skies. In spring, look down to find rare blue gentians, mountain avens and purple orchids at your feet. Glide slowly south to Doolin where you can catch a ferry to the Aran Islands or stay put and join in a singalong at Gus O’Connor’s pub.

The Healy Pass. Photo: Chris Hill/Fáilte IrelandDeep in southwest Munster, if you follow the narrow road that curls around Ballycrovane harbour to a lonely headland at Kilcatherine Point on the peninsula’s northern side, you will come upon the Hag of Beara, the Cailleach Bhéara. A wise woman or witch, she has morphed into a conglomerate rock and stands on a commanding position with an unimpeded view of the wide arc of Coulagh Bay. This bewitching and under-visited part of west Cork, with its shape-shifting light, big skies and seascapes in harmony epitomises the wildness of the Atlantic Way.

Escape the tourists on the Ring of Kerry by veering off south of Cahersiveen, taking the Skellig ring road, a quiet 30km circular loop beside Portmagee Channel separating Valentia Island from the mainland. Over the Coomanaspic Pass you need to keep your eyes on the road but pull over at the viewpoint to catch sight of the Skelligs and the gannets. The road curves around Ballinskelligs Bay, then re-joins the main Ring of Kerry where afternoon tea in the Butler Arms Hotel at Waterville, beloved by Charlie Chaplin, is a must.

Article courtesy of Paul Clements who is the author of Wandering Ireland’s Wild Atlantic Way – From Banba’s Crown to World’s End published by The Collins Press at €12.99.

One thought on “The Wild Atlantic Way. Top 10 Drives.”