I searched for a word that would be a true description of this statistic.  I found 37. I then put them all together and found the word 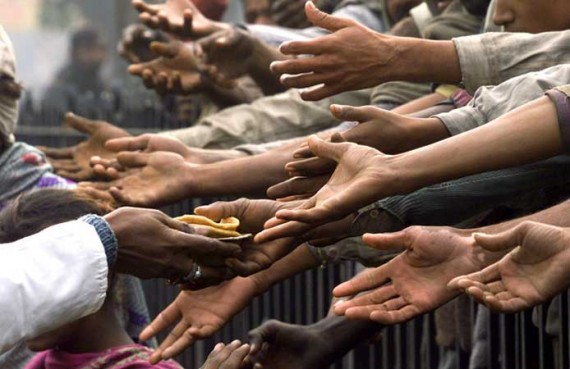 The world’s 26 richest people now own the same wealth as the poorest half of humanity, Oxfam said Monday, warning that “out of control” inequality is stoking popular anger and threatening democracies.

“We are seeing rich people running away with wealth and poor people sinking in poverty,”

A new report from the charity was published ahead of the World Economic Forum in Davos — a week-long meeting of the global elite, with three of the 26 richest people set to attend.

The report found that billionaires around the world saw their combined fortunes grow by $2.5 billion (2.2 billion euros) each day in 2018, an annual increase of 12 percent, and urged governments to slap more taxes on the wealthy.

The world’s richest man, Amazon CEO Jeff Bezos, saw his fortune increase to $112 billion last year, Oxfam said, pointing out that just one per cent of his wealth was the equivalent to the entire health budget of Ethiopia, a country of 105 million people.

Extreme inequality is now out of control.

The 3.8 billion people at the bottom of the scale meanwhile saw their relative wealth decline by $500 million each day, or 11 percent last year.

The growing gap between rich and poor is undermining the fight against poverty, damaging economies and fuelling public anger.

The report, released as the world’s rich, famous and influential began arriving for the annual gathering at the luxury Swiss ski resort town, urged governments to “stop the race to the bottom” in taxing rich individuals and big corporations.

Asking the richest to pay just a meagre 0.5 per cent extra tax on their wealth “could raise more money than it would cost to educate all 262 million children out of school and provide healthcare that would save the lives of 3.3 million people”.

So now do you agree that this situation which has been allowed to happen in this ‘enlightened age’ is truly described by the word ‘OBSCENE’.

WHAT WORD WOULD YOU USE TO DESCRIBE OUR SILENCE ???

2 thoughts on “World’s 26 richest own same as poorest half of humanity.”